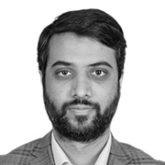 Barrister Sheikh Danish Iftikhar is an Advocate by profession. He completed his LL.B. (Honours) (External Programme) of the University of London, UK at Islamabad School of Law, Islamabad, Pakistan and then undertook the Bar Vocational Course (BVC) from the then Inns of Court School of Law, City University, UK. He got called to the Bar of England and Wales by The Honourable Society of Lincoln’s Inn in July 2005. He received Post Graduate Diploma in Professional and Legal Skills from City, University London in 2005.

He undertook mostly litigation work from 2005 to 2007 as Associate at Adil Law Associates before joining Khan and Piracha, a Corporate Law Firm where he vetted and drafted agreements, rendered legal opinions and prepared due diligence reports for multinational clients. He was also involved in providing assistance in procuring mining licenses and other incentives for a copper and gold mining company.

Sheikh Danish Iftikhar then worked as Partner at Adil Law Associates from 2008 to 2019 and appeared in Rawalpindi and Islamabad courts. He primarily deals with issues relating to contract law and has drafted and reviewed lease agreements, rent agreements and arbitration agreements. He has also represented companies in recovery matters. He also undertook work relating to guardianship. He has good negotiation skills. He has also appeared in a few criminal cases regarding bail before arrest. He joined Azam Chaudhry Law Associates in October 2019 and is working as a Senior Associate. He has also taught Law of Trusts at Islamabad School of Law.